Home ▸ The Loss of a Legend 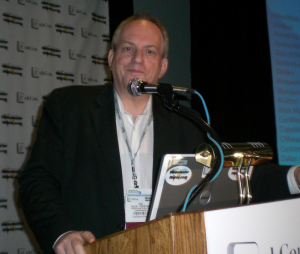 Tedster was a familiar face at PubCon

I learned a few hours ago that a legend in this industry, Ted Ulle, known as Tedster in the Webmaster World forums has passed away. You can read Brett Tabke’s post here.

I want to tell you a story about Tedster and our first meeting at PubCon in New Orleans back in 2005. I have shared my story of how attending that PubCon made me a millionaire. In that post the first person I mention is “tedster”. That’s with good reason.

It was during one of the lunch breaks. I was sitting alone going over the schedule to see which sessions I wanted to hit next. Tedster sat down right next to me, “You look like a first-timer.” I nodded. “We love first timers. Tell me about yourself.” We chatted one-on-one for the next 15-20 minutes. I shared my struggles, he shared his that he had in the past and he “showed me the ropes” on how I could get the most from not just PubCon, but from Webmaster World.

“You see Jerry, this is not about who can get rich, this is about how you can enrich your life and those around you…and make a little money too.” He said with a big smile at the end and elbowing me. He then got serious and told me that when I made it big (he emphasized “when”), it is important to give back. To help those who are just starting out, or those who just need a little help getting over a hump.

Most people who have enjoyed the success I have been fortunate to have would have kept quiet, but not me. I knew my roots. I knew that I was able to attain the level of success because of people like Tedster who took time out of their life to help me. So I’ve done the same. Paying it forward.

He stood up to leave, put his hand on my shoulder. “Keep coming back to PubCon Jerry. You’re going to be one of the good ones.”

There was no one better than Tedster.

I challenge you to take time out of your schedule today to help someone. Make a positive difference in someone’s career. Ted did it every single day. I’m going to take the challenge too. Write your comment below and I’ll be randomly selecting people (yes, that means more than one) to have a 30-minute phone consultation at no charge this afternoon. Your legend will never die with us Ted.

Edit: Congrats to Ed Shapiro from Sensory Edge for being the lucky draw out of the hat for the consulting call. Had a great chat with Ed about his business. Visit his site and buy some of his shit. :)

Update: When we moved to the new server, comments on two posts were lost including this one.